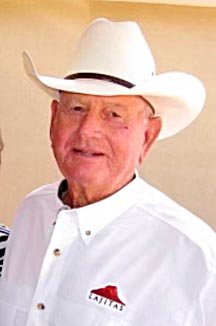 He was born October 20, 1935 in Fresno, California to Virginia (Blair) and John Richard (Jack) Griffin. He married the love of his life Sylvia ( Kerr) Griffin on April 16, 1960 in San Angelo, Texas. He was a life time resident of Schleicher County. A graduate of Eldorado High School in 1954 - he attended San Angelo Jr. College where he was on the rodeo team. Lynn worked for Northern Natural Gas/Enron for 39 years. He is was a member of various boards and active in the Schleicher County Rodeo club.

Lynn was beloved by his family and friends. He opened his home to the young and old for countless meals and fellowship. He love to fish, hunt and rope calves. Lynn and his friends traveled all over West Texas roping. But above all he loved the ranch and was a true steward of the land. He devoted his life to his adored wife, Sylvia and extended family, raising his grandchildren and a nephew and was father to all.

The service is at 11:00 a.m. Tuesday, November 1, 2022 at The First Baptist Church in Eldorado, Texas with Dr. Blake O’Dell officiating. Interment will be at the Eldorado Cemetery prior to the service.

Lynn was preceded in death by his parents and his brothers Derl Griffin and Dan Griffin.

Memorial contributions may be made to the Schleicher County Museum or the Eldorado Public Library.