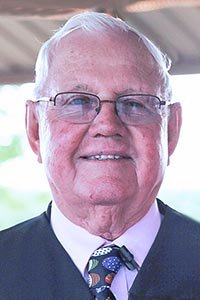 James “Jimmy” Claude Doyle, age 86, of Eldorado passed away on November 9, 2022 surrounded by his family. He was born in Eldorado on July 1, 1936 to Bessie (Yarborough) and John Claude Doyle. He was raised and worked on several area ranches. He was a graduate of Eldorado High School, where he played football.

Jimmy was married to Anne Postell and had two sons. Jimmy served in the National Guard Reserves. In 1955, he went to work for the Texas Highway Department as an engineer for 39½ years retiring in 1990. While working for Texas Highway Department, he became a commercial pilot for them, flying people and materials to job sites. Throughout his adulthood, he was the mayor, a city councilman, and a volunteer fireman in Eldorado. Jimmy dedicated many hours to the Eldorado airport, including serving on the airport board, assisting with airport fly-ins, and helping with maintaining the airport.

In 1975, Jimmy married Nancy Blount, known as “Teacher” or “Nana” to not only her kids and grandkids but to many across the community. In 1994, some friends encouraged him to run for Schleicher County Justice of the Peace (JP). Jimmy won and served as JP for 20 years retiring in 2014.

Jimmy had a passion for flying, which he shared with his son J.D. Jimmy and Teacher made several trips around the United States. He also farmed and ranched that included goats, cows, sheep, a donkey and a barn full of cats. He loved to fish and hunt with his boys and friends.

Jimmy is survived by his wife of 47 years, Nancy; son J.D. Doyle and wife Charlyn of Christoval; and son Mikel Doyle and wife Julie of San Angelo. He is also survived by five grandchildren, Mikel David Doyle & wife Chelsea of San Angelo, Ryan Doyle & Precious of Carrollton, Cassie Carson & husband Derick of Lubbock, Jensine Doyle & Brett Rasberry of Christoval, and Stella Doyle of Franklin, Tennessee. He is survived by five great grandsons and a great granddaughter. Jimmy is also survived by a brother, Jerry Doyle and wife Heavia of Edinburg and brother in law Bill Etheredge of Lubbock. He’s also survived by nieces and nephews.
Jimmy was preceded in death by his parents, a sister, Burnell Etheredge, a niece and nephew.
In lieu of flowers, please send donations to the American Cancer Society, Schleicher County Library or a charity of your choice. Our thanks to Dr. J. Punnoose at Shannon Medical, the staff of Schleicher County Nursing Home and Hospice of San Angelo.

Memorial service for Jimmy Doyle will be held at 11:00 AM on Saturday, November 12, 2022 at the First Baptist Church of Eldorado.