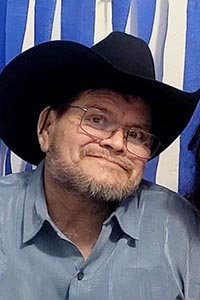 Porfirio C, Arispe, Jr.  was preceded in death by his mother and father Geneva and Pilo Arispe and his grandparents Paula & Felix Arispe. He passed away in San Antiono, Texas on October 3, 2022.

Porfirio was born on August 13, 1961 in Eldorado, TX. There, he spent the majority of his life. Most people knew him as Shorty, because he was so tall.

He built a career working as a lineman. He was known to many and was loved for his kindness, selflessness, and positive outlook on life.

He enjoyed spending time with family and friends while drinking beer and watching his favorite team play, the Dallas Cowboys. He spent his entire life loving his wife Maria Arispe of 40 years in which he spent the remainder of his days with her by his side.

A memorial service will be held at 9:30 a.m. on Saturday, October 15th, at the Agape Assembly of God in Eldorado, followed by the interment of ashes.

A repast meal will be served for family and friends at the Eldorado Civic Center.