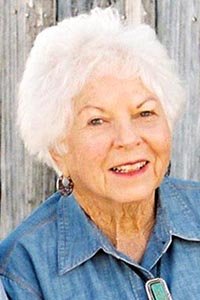 Sharon Ann (Sherry) Johnson of Eldorado, age 75, passed away peacefully on July 31, 2022. She was born on March 7, 1947, in San Antonio to Gus and Anna (Campbell) Eustace. Her early upbringing was in Campbellton, Texas before moving to the Harrison Ranch between Rocksprings and Sonora in 1959. She graduated from Rocksprings High School in 1964 and from Texas Tech University 1968. Later that year she married R.D. (Bob) Johnson Jr. and began married life on the ranch near Eldorado. There they raised two daughters, Ashley and Lindsay.

She was involved with all of her kids’ activities as a 4-H Leader, rodeo mom (and grandmom) and supporter of the community. She was the mom that would load the car with Ashley and Lindsay’s friends and take them to all the fun functions, be it a dance, ski trip or even Acuña! In more recent years, nothing was more important to her than her grandchildren’s activities. In true grandmother fashion, she thought her grandchildren were the smartest and most charming children around!

Sherry was preceded in death by her husband, Bob; parents Gus and Anna Eustace; and an infant brother. She is survived by daughters, Ashley Moore and husband Brent of Eldorado, and Lindsay Cranek and husband Frank of San Angelo. She is also survived by grandchildren Logan and Henry Moore; sister Kari Cloudt and husband Carl of Rocksprings; and Joe Eustace and wife Melinda of Pleasanton and a niece and nephew. We would also like to thank her special friends and caregivers, Georgie Lee and Araceli Gonzalez and the staff at the Schleicher County Nursing Home during her recent stay.

Please consider a donation to the charity of your choice in her memory.