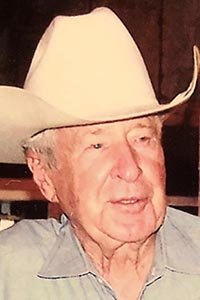 Billy Green of Eldorado and Sonora went to his eternal home to be with his Lord and Savior Jesus Christ on August 4, 2022, leaving his earthly home west of Eldorado, in Schleicher County, Texas.

Born December 15, 1924 to Thomas Franklin and Ruth Parks Green, Billy was the sixth of seven children, who all grew up on the family farm in Schleicher County. His dad passed away when Billy was only six years old, so he and his five brothers and sister were raised by his mother. Billy spent his entire youth working with his siblings on the family farm and learning the ropes of ranching, farming, and surviving the Great Depression. Billy and his generation, as a part of daily living, persevered through hardships that we can scarcely imagine.

After graduation from Eldorado High School, Billy found cowboy work on various ranches while pursuing his love for the sport of rodeo, mostly bull riding and calf roping. In 1949, Billy won the Bull Riding Championship at the world famous West of The Pecos Rodeo. He always said, “You may think you know the bull, but actually you never know the bull.”

In addition to competing in rodeo events, Billy was a fun timing rodeo clown for several performances, getting his biggest applause when he and the other clown, on the “spur” of the moment, rode a bucking horse around the arena, Billy facing backwards and holding on to the tail.

In 1950 Billy married his first wife, Gloria Henshaw, and soon left the rodeo life. To make ends meet, Billy worked on area ranches until 1954, when the family moved to Sonora. Soon after they moved, he bought the Vernon Cook windmill service and started his own business, to become known as Billy Green Water Service. It didn’t take long before Billy developed a reputation of being the man to call for windmill and pump repairs in Sutton and surrounding counties.

Following a divorce, in 1967, Billy married his second wife, Camille Luckett. As loyal Sonora Bronco football fans, Billy and Camille followed the team to every game for many years. They loved pretty much all things red.

Billy continued to service many area ranchers’ water needs for 50 plus years before settling down and running his modest cattle operation, occasionally with some sheep and goats, in Schleicher County. Billy knew cattle and loved his cows.

Billy is preceded in death by the 2002 passing of his wife, Camille, his brothers Carol, Glenn, Kenneth, Odell, Tommy, and his sister Lula Mae Joiner.

A very special thanks goes out to his dear friend and companion for 15 years, Suzi Cypert, for helping with all kinds of ranch and water business chores and ventures, and especially for being a wonderful spiritual encourager to Billy and his family. An important thank you goes also to Lucy Guzman, his caregiver turned good friend during the past couple of years. Also, many thanks go to Brad, Shandy and the rest of the Concho Hearts Hospice team for the spirit-filled caring and professionalism in their services.

If so led, donations to the church or charity of your choice will be appreciated. Online condolences may be made at lovefuneralhome.net