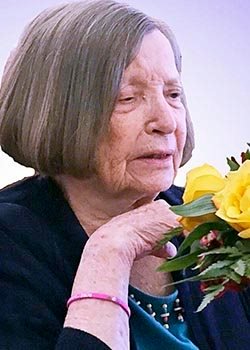 Funeral services celebrating the life of Iretta Faye Mace Stanford, age 84, will be held at 2 pm on Wednesday, December 20th at Northwestern Baptist Church, 3901 Mockingbird Lane, Midland, Texas with visitation beginning at 1:00. Burial will be Thursday at the Eldorado Cemetery in Eldorado, Texas.

Iretta was born on September 26, 1933, to J.H. (Skeet) and Faye Floyd Mace in Dalhart, Texas, and moved to Eldorado at a young age. She graduated a year early from Eldorado High School where she was a cheerleader and Valedictorian of her class. She then attended Texas Tech University.

Iretta married Albert L. Stanford, a petroleum engineer, also from Eldorado, on June 6, 1953; they were married for 64 years.

lretta was a homemaker and elementary school teacher in Louisiana and also in Midland where she retired after 23 years.

She was very artistic and enjoyed sewing and crafting. Iretta loved attending sporting events, especially when any of her children or grandchildren were involved and always cheered on the Red Raiders. She found great joy in her family and loving and caring for them.

She was preceded in death by her parents, her grandson Chris Stanford, and her daughter-in-law Connie Stanford.

Iretta will always be in our hearts ... because that is where she is still alive.

In lieu of flowers, the family requests donations to the ALS Association Louisiana Mississippi Chapter (webla.alsa.org) or the charity of your choice.